As an electrician in training, the electrical wiring colours are one of the first and most fundamental lessons you’ll learn. This post teaches you everything you need to know about the wiring colours in the UK, including the new system, the old system, and single- vs three-phase wiring.

Before we dive into learning about the colours of the wires themselves, it’s important to understand why we have three different types of wire and the role that each of them plays in the circuit.

The earth wire is a safety feature in electrical wiring systems. It stops you from getting an electric shock by providing a path for the current to flow to the ground (or earth, hence the name). At the same time, the earth wire prevents current from flowing through the faulty circuit by breaking the fuse or circuit breaker.

The live wire carries current towards your appliances from the power supply.

The neutral wire carries current away from your appliances and back to the power supply.

What Are the New Wiring Colours?

As you can see in the image below, the new (current) wiring colours in the UK are: 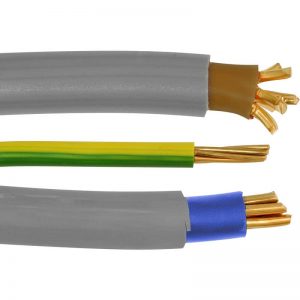 What Are the Old Wiring Colours?

The old wiring colours in the UK still have three wires: earth, live, and neutral. However, in older wiring systems, you’ll find that the colours of these wires are different: 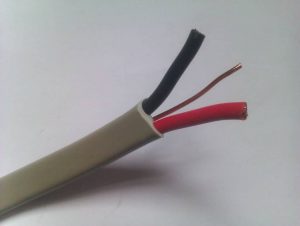 When Did the New Wiring Colours Come In?

The new wiring colours became mandatory in 2006, although they had been in use since 2004. It may seem confusing to have two systems, but the new system was actually introduced so that the UK’s wiring colours match up with other European countries. This explains why you might hear the new system referred to as the ‘harmonised’ system.

In practice, you’re more likely to come across the new wiring system. As of the 1st April 2006, the government changed the legislation outlined in BS 7671 (Requirements for Electrical Installations) to make it illegal to use the old wiring colours in new installations. If you come across a system that hasn’t been updated since then, however, the old wiring system may still be in place.

Some properties have both old and new electrical wiring systems. Any extensions built after 2006 will feature the new wiring colours, but the rest of the house may still have the older colours. The introduction of new legislation didn’t state that existing buildings had to be rewired completely – rather, the change just meant that new installations must use new wiring colours.

In situations where both wiring systems are present, remember that:

Now that you’ve got the hang of the old and new wiring colour systems, the next lesson to learn is the difference between single- and three-phase power supplies. We won’t go into too much detail here, but it helps to understand how these two systems differ, why they are used, and what they look like in terms of electrical wiring.

Single-phase is by far the most common system and is used in most homes, whereas three-phase supplies can cope with large amounts of power so are used in industrial buildings. The domestic wiring systems we’ve discussed so far are single-phase, with three wires (earth, live, and neutral).

With a single-phase system, there’s one supply of alternating current (AC) with a voltage that varies over time in unison from positive to negative, so there will be moments when no power is supplied. On the other hand, three-phase systems can be thought of as three AC supplies working together with their sine waves out of phase, so power is always being supplied.

It’s fine to have a single AC supply in domestic contexts because lighting and low-power appliances can function with the variation in power. We need three-phase systems for industrial usage so that there is always power being supplied – without this constant supply of power, heavy machinery would not be able to function properly. Moreover, in the UK, three-phase systems supply a higher voltage of around 415V compared to roughly 240V for one-phase systems.

We’ve covered a lot of material here, so let’s run through a few key takeaways to finish off:

This guide has taught you about the old and new electrical wiring colours in the UK, as well as single- and three-phase systems. If you’re looking to get into the electrical trade, take a look at our range of electrical training courses & 18th edition courses or get in touch today.

Guide to Electrical Wiring Colours in the UK